Hendrick Farm isn’t your typical neighbourhood development, so we often get asked questions about how things work, or why certain things are the way they are. Below we’ve compiled a list of the most frequently asked questions and their answers. If you have any other questions, please send us an email here.

What is the projected project completion date?

The residential portion of the Hendrick Farm project is expected to be completed by 2024.

What types of homes and units will Hendrick Farm include?

What size of homes do you offer?

Learn more about our homes  >

What is your deposit structure?

Hendrick Farm requires a $20,000 deposit at contract signing and another $30,000 ten days later. Unlike other new builds, this is all that homebuyers at Hendrick Farm are required to pay until they take possession of their new homes.

What are the school options in Chelsea?

Is there public transportation available?

Transcollines currently has three lines (921, 923, 925) making the trip to and from Gatineau via Chelsea. Trips either way can be made in the morning, at mid-day, and in the evening, although the majority of buses leave for Gatineau in the morning and return in the evening. We also anticipate an increase in transportation options as the population of Chelsea continues to grow.

Find out more about Transcollines  >

I'm buying a townhouse or single family home. Should I upgrade to a finished basement?

That is entirely up to you. There is a fairly even split among current residents at Hendrick Farm who have chosen to upgrade to a finished basement and those who have left their basement unfinished. Your choice will depend on a variety of factors—are you looking for more storage space or are you looking to increase the square footage of usable living space? Do you need that living space now, or are you interested in finishing the basement yourself in the future? As a standard, all our basements come with 8 ft. ceilings, laundry room, and roughed-in plumbing for a basement bathroom. Our finished basements, depending on house model, can include an additional bedroom, a full bathroom with custom cabinetry and stone countertops, and a recreation room.

Are light fixtures and appliances included in your homes?

Interior and exterior light fixtures throughout our homes are included. We have multiple high quality interior lighting packages for homeowners to choose from.

Appliances are not included. As is standard in most new builds, you will be asked to purchase and install your own appliances.

Will there ever be projects like Hendrick Farm elsewhere?

Hendrick Farm developer, Landlab Inc, is always on the lookout for incredible pieces of land on which to build new communities.

Are your homes energy efficient?

We believe that when you build properly, and to high standards, energy efficiency is a guaranteed by-product.

Why don’t you have solar roof options?

We are closely watching the roll out of the Tesla roof systems, however the current electricity supply at Hendrick Farm is 100% renewable via a hydro dam located approximately 3km away. With electricity prices in Quebec sitting at less than half of those in Ontario, we are lucky to have an affordable green energy source that already exists, with an extremely long life cycle.

Do your homes use septic systems and/or wells?

The entire Hendrick Farm neighbourhood is connected to municipal sewer and water systems.

Do you still get your individual backyard or are there only shared spaces?

All single family homes and most townhomes in current phases have private backyards. Stop by our sales centre to learn more about a specific homesite.

Will I be able to have a pool or shed in my yard?

Sheds are allowed as long as they conform to the Hendrick Farm architectural requirements.

In order to maintain a cohesive look and feel for the entire neighbourhood, pools are not allowed. Luckily, Gatineau Park offers a variety of swimming opportunities in the great outdoors.

Are your parks & trails and green spaces available for public use?

Yes, all Hendrick Foundation land (which includes a variety of green spaces as well as a children’s park) is privately funded for public enjoyment.

Learn more about our parks and trails  >

Do you host weddings?

No. Our green spaces are reserved for events that engage and/or benefit the community as a whole.

What is the 1% mechanism and how does it work?

Learn more about the Hendrick Foundation >

Are there benefits to moving to Chelsea?

Inexpensive Hydro. The entire province of Quebec runs on hydroelectric power, which is not only some of the cleanest power around, but also the most affordable. The average monthly Hydro Quebec bill for a customer using 1,000 kwH is $71. In Ontario, that same customer would be paying $148.

Shorter Commute. Do you currently live in Riverside South, Kanata, Stittsville, Barrhaven or Orleans and work in the  downtown core? If so, Hendrick Farm is actually a shorter commute by car. The following screenshots were taken during an average Tuesday morning commute. 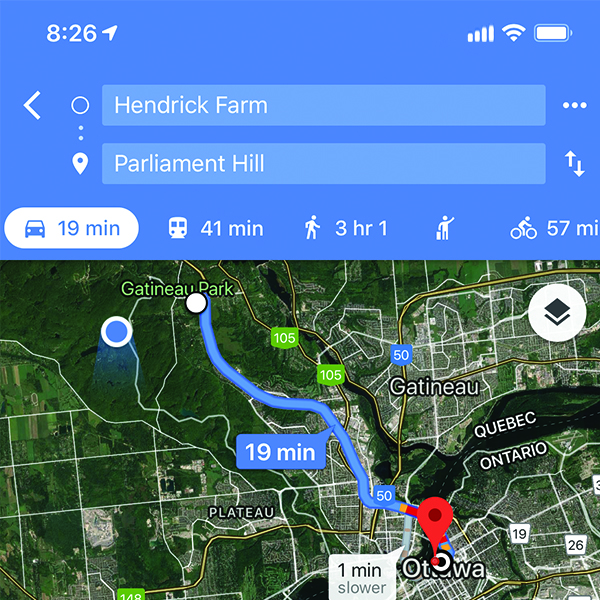 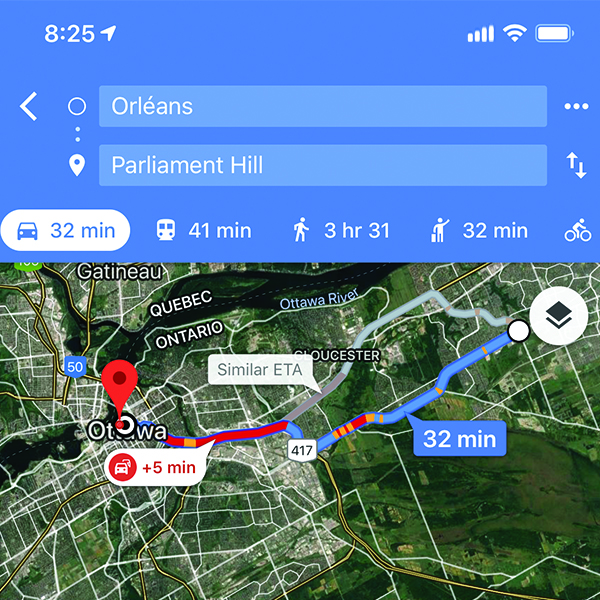 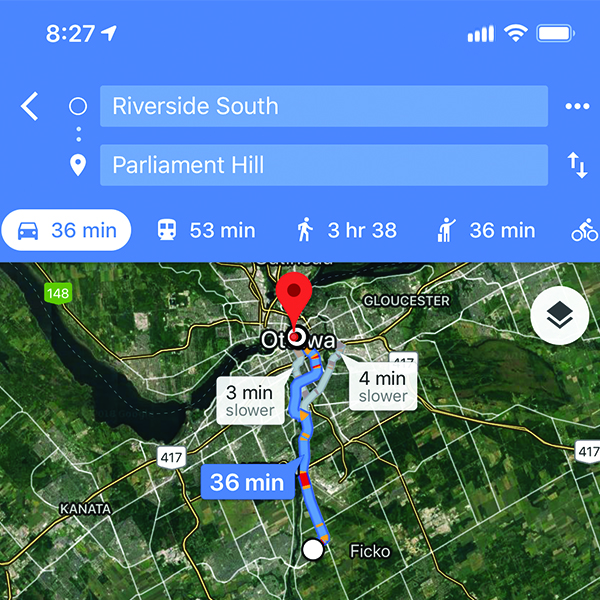 New McGill Faculty of Medicine Campus. While Quebec residents have access to hospitals in both Ontario and Quebec, both provinces have suffered a shortage of doctors in recent years. Luckily, the McGill Faculty of Medicine recently announced the opening of a new satellite campus in Gatineau, whose first class will be welcomed in 2020. This campus is expected to triple the number of medical trainees in the Outaouais region. In any case, medical services are available to Chelsea residents in both Ontario and Quebec.

Benefits for parents. Those who have, or are planning to, start a family will see an enormous benefit in moving to Chelsea. These benefits include the Quebec Parental Insurance Plan (which entitles the father and mother of a newborn to combined parental leave of up to 55 weeks),  the Quebec Dental Plan (ensuring children under the age of 10 have access to a variety of free dental services, including but not limited to, one examination per year, x-rays, anesthesia, fillings and oral surgeries), and affordable childcare services with reduced-contribution spaces (for children aged 0 to 5 at a cost of $7 per child per day).

Living next to Gatineau Park. Recent studies have shown that living close to nature can both prolong lifespans and help improve mental health. Luckily, Hendrick Farm is located on the cusp of Gatineau Park and its 361 square kilometres of stunning lakes, parks, and trails. Hendrick Farm’s on-site trail system offers connections to the park – think hiking, mountain biking, cross country skiing, snowshoeing right on your doorstep.